Spotted Lanternfly Arriving in the Midwest 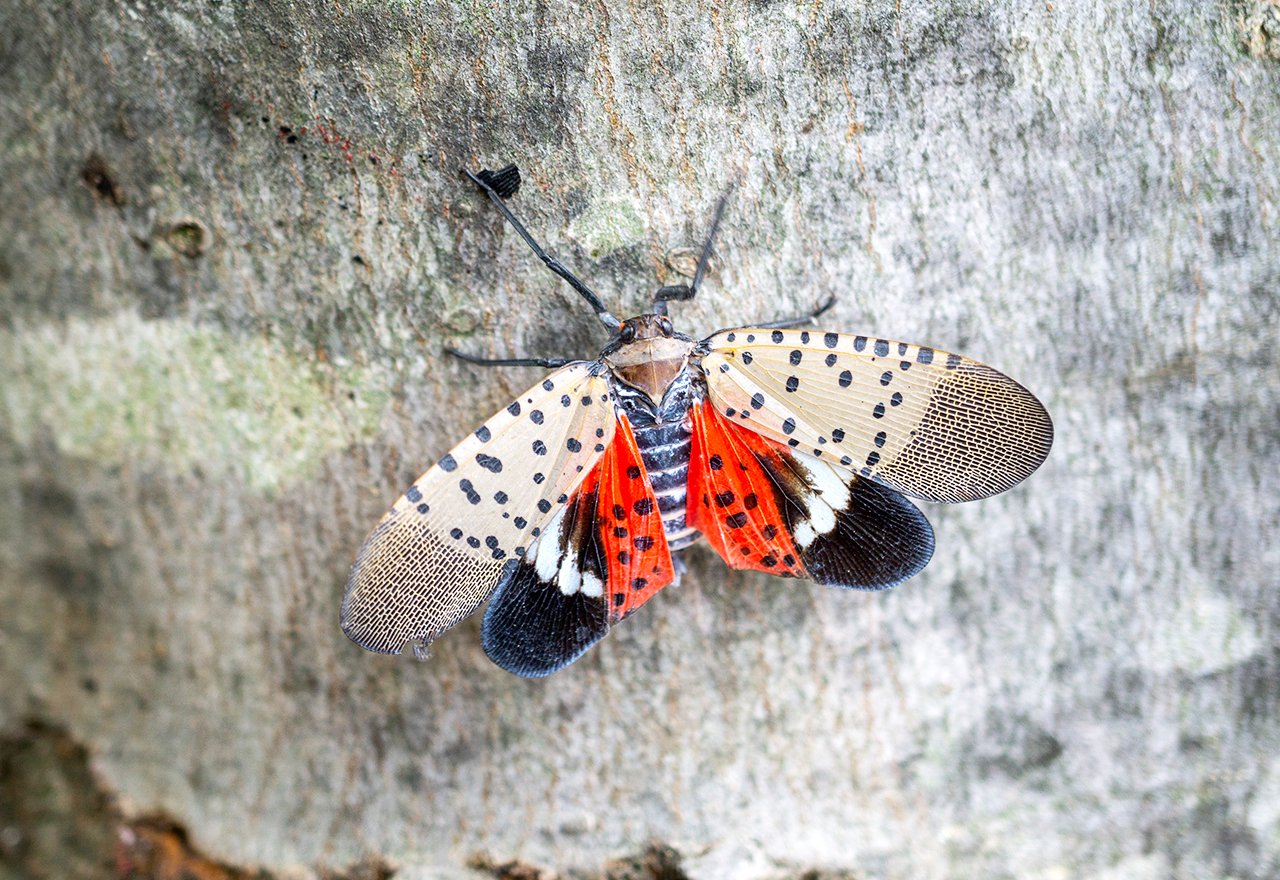 SLF were first found in the United States in Pennsylvania in 2014. As of October 2021, the insects are in 11 states in the USA: Connecticut, Delaware, Indiana, Maryland, Massachusetts, New Jersey, New York, Ohio, Pennsylvania, Virginia, and West Virginia.

What is the Concern with Spotted Lanternflies?

So what’s all the hype about? This planthopper is extremely destructive and is not native to this region of the world, but actually from Japan, China, India, Vietnam, and Taiwan. It is now an active nuisance in Korea as well. They cause a great deal of damage to a huge variety of crops and trees including:

Both the adult and nymph stages of this insect feed on plants using their mouthparts that suck phloem tissue (the soft, vascular parts of plants) from their hosts. This not only harms the plant where feeding occurs, but also disturbs the growing cycle of the plant itself, weakening it significantly. Often, leaves wilt and growth may stop; the plant may even die. The plant may also ooze sap and the SLF will produce a liquid called “honeydew,” both of which can sometimes become moldy. Mold growth on any plant is the start of the end of its life. 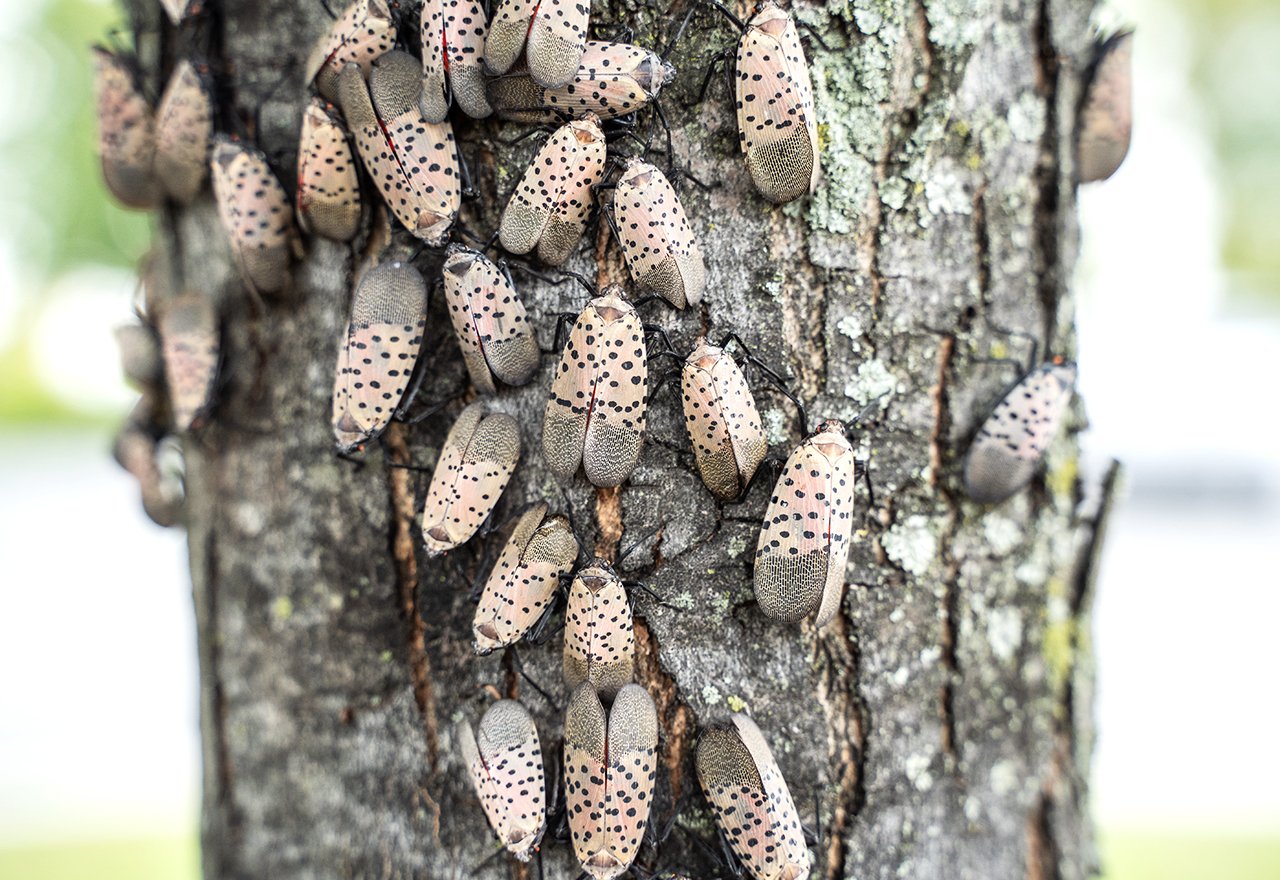 How to Identify a Spotted Lanternfly and it's Lifecycle?

Spotted Lanternflies (Lycorma delicatula) are colorful with distinctive markings at each life stage, making them easy to identify. Lanternfly eggs spend the Winter in brown to grey egg masses that look like a shiny smear of mud on trees or other hard, outdoor structures. They hatch in the Spring (as early as April) and go through four different nymph instar phases. Instar stages one through three are black with vivid white spots. Each instar increases in size. The fourth instar has red and black stripes with white spots and are even larger, just over half an inch. All instars are strong jumpers, but do not have wings. Spotted Lanternflies grow into adults by July in the Midwest and gain wings. While they are not strong flyers, they are very good jumpers.

It's important to note that Lanternflies are not a type of fly at all, but instead a planthopper, much like grasshoppers. When their wings are closed, only the forewings are visible, which are tan to grey with black spots and black tips. But when Spotted Lanternfly adults are jumping, or flying the little they can, their colorful red and black hindwings are exposed as well. Adult bodies are black and the entire insect is about one inch long. Adults mate and lay eggs from September through the first hard frost. Thankfully, only one generation of SLF grows per year.

What to do if You See a Spotted Lanternfly?

The US Department of Agriculture has put in place some areas of quarantine where large populations of SLF are known. The Department is actively trapping and using chemicals to kill populations as well. If you think you’ve found a Spotted Lanternfly, take a picture, and then kill it! If you are not located in a current known infestation area, report your finding to the Department of Agriculture in your state (Ohio, Indiana, or state directory) or report it to the Great Lakes Early Detection Network.

Additionally, don’t move firewood. We’ve been told for a long time to buy firewood when camping to reduce to spread of Emerald Ash Borer and other invasive bugs. The same goes for spreading SLF. This insect has only been able to travel as far as it has through hitching a ride on infected materials that humans move. To reduce SFL infestation in your area, it’s also a good idea to remove Tree of Heaven (Ailanthus altissima) on your property. This fast-growing tree is a major host for adult Laternflies and is itself invasive.