Why Are My Trees Losing Their Needles? 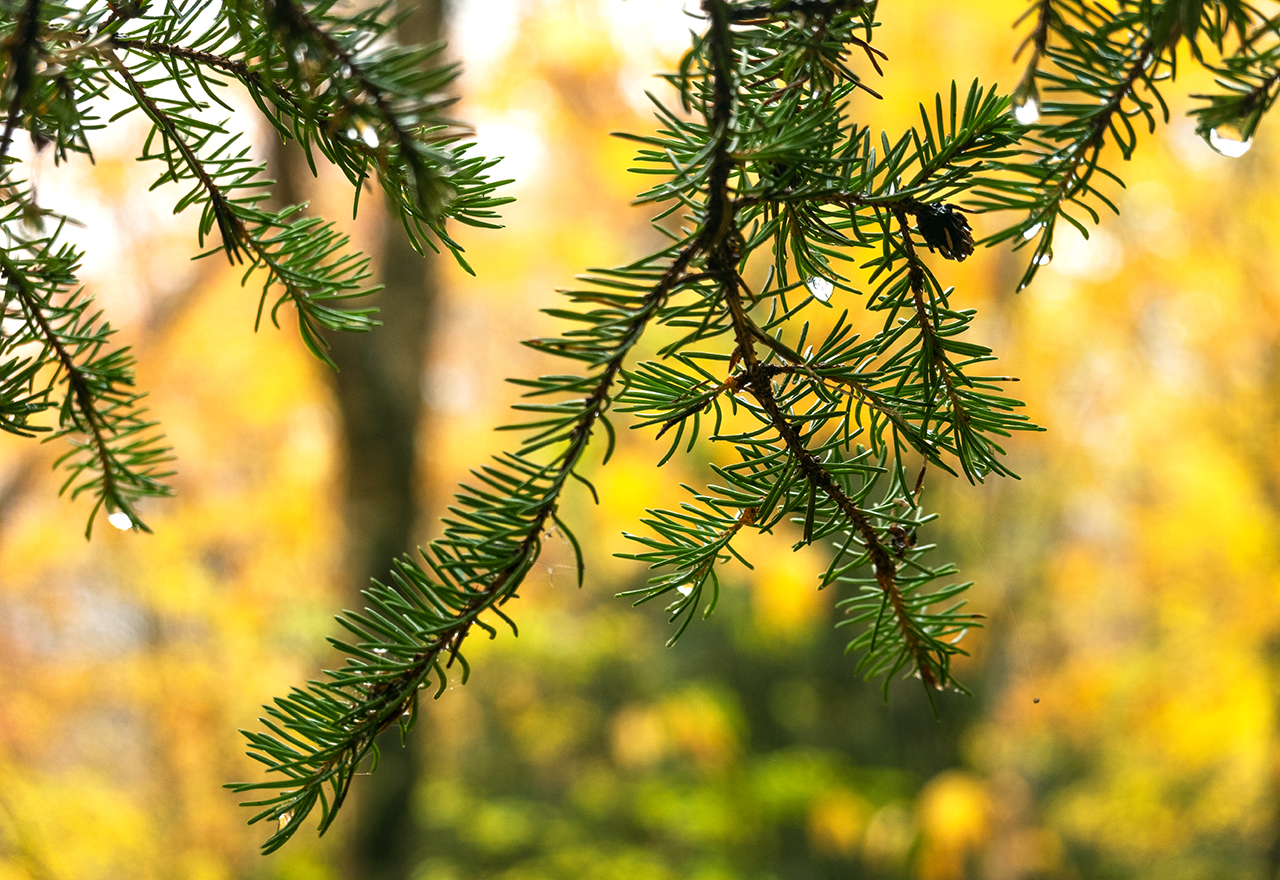 In the Midwest, we have both evergreen conifer trees and broadleaf deciduous trees. We expect the leaves of deciduous trees to change to beautiful fiery shades in Autumn, and drop to the ground before Winter to create a mulch for plants and nests for overwintering animals and insects. In fact, we celebrate and enjoy this process just as much as we enjoy new growth in the Spring. Autumn leaves are beautiful! The process starts when evening temperatures drop and days become shorter and the leaves slowly change and fall. But when narrow leaf evergreen trees start to lose their needles, we get nervous. There’s no celebration for conifer needles falling. Despite their name, evergreen trees do not retain their needles endlessly. Conifer seasonal needle drop is an annual occurrence too – we just don’t always notice it.

On narrow leaf evergreens, the inner, older needles drop in the Fall. Most conifers drop needles that are more than a year old. Eastern white pines (Pinus strobus) for instance, drop needles that grew two or three years ago. These specific trees often cause the most alarm because their structure is more open than many other conifers and their needle drop is more conspicuous. Spruce trees, on the other hand, keep their needles for longer (up to seven years depending on the species). Arborvitae, like white pines, drop their needles after two years. Hemlocks drop needles that are four years old. Junipers hang on to their needles for up to ten years! For all evergreens, the amount of needles that drop depends on the amount of growth from the previous year. If the tree had a large amount of growth over the previous year, it will drop a large amount of needles from past growth. Dropped needles make a tidy mulch below evergreen trees, which adds acidity to the soil and helps it retain moisture, which evergreens prefer. Many landscapers actually add more needle mulch below conifers to reduce weeds and because bark or wood mulch gets mussed by needles. 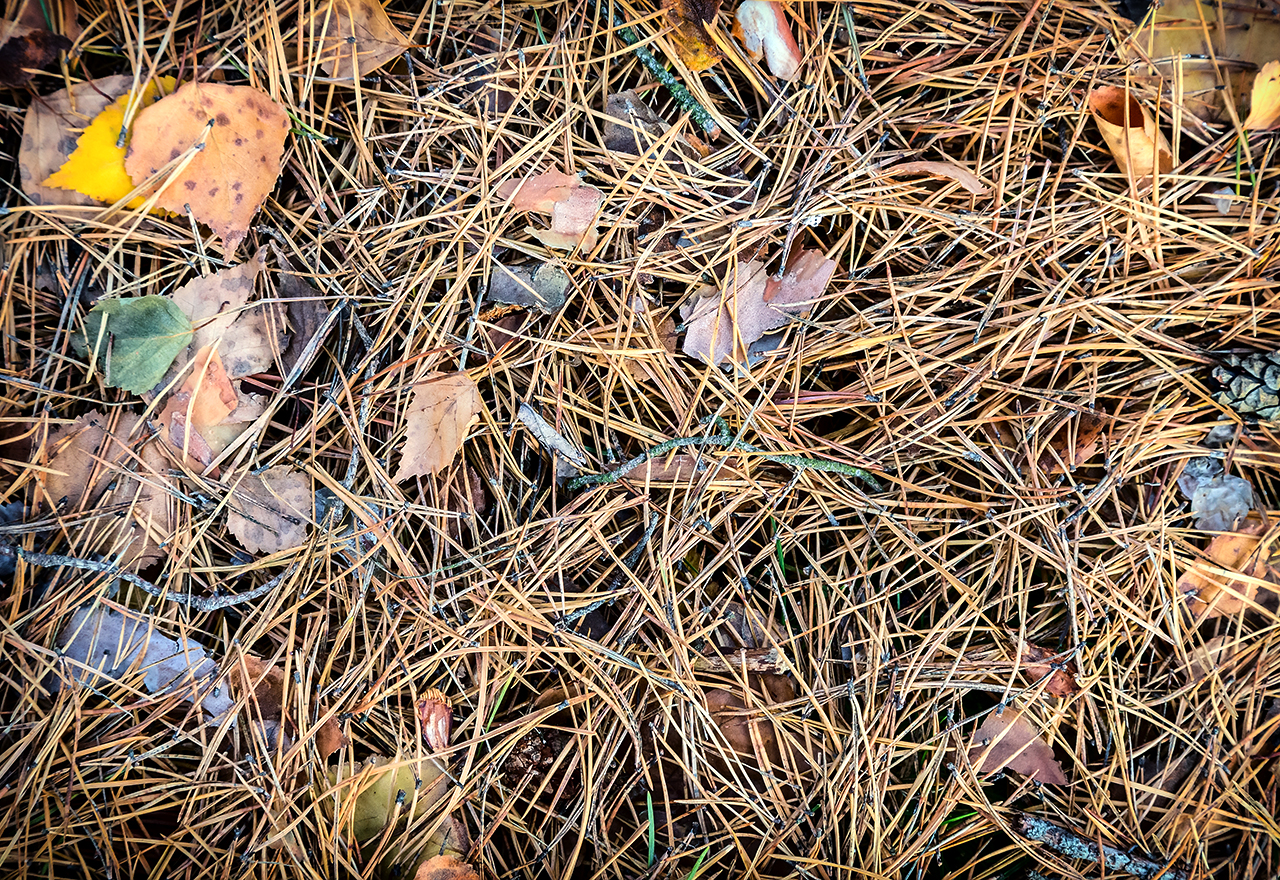 If you’re worried about needle drop this fall, inspect your tree further. If you find that needles are not uniformly dropping, this may be a sign of disease or an insect issue. If the needles are black, splotchy, contain a lot of holes or are covered in webs (possibly caused by mites), this might be cause for more investigation and may be a sign of more than just seasonal needle drop. Additionally, if needles on the ends of the branches – new growth – are dropping, this is a sign of stress that needs your attention. It may be a good idea to do a soil test to see if the tree is lacking nutrients. We offer a Soil Analysis or you can often do a test through your local university extension office. The lab we use is Brookside Laboratories, which was founded by the father of organic agriculture, William Albrecht. We think that’s pretty cool! Do your research on tree diseases and pests and decide which approach is best for your situation. We offer information on pests and other lawn issues, but they are not the same as tree-infecting diseases and insects. 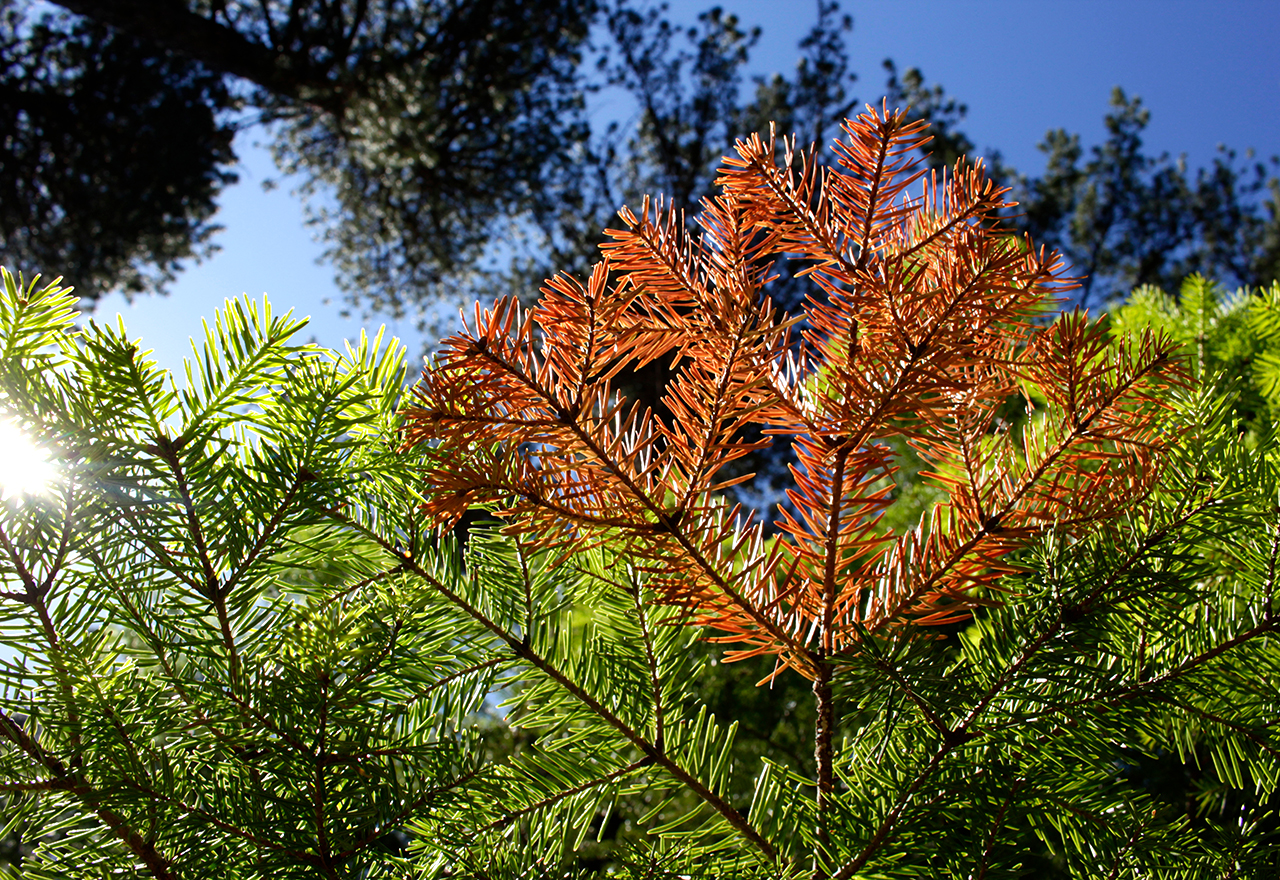 Also, environmental stress, usually drought stress, can cause a greater than normal amount of needles to turn color and fall from conifers. We had drier than normal weather this growing season and many conifers are showing symptoms of drought stress by dropping more inner foliage than is typical. Drought-stressed plants are also more susceptible to pests and diseases and prolonged dry weather can cause many plants to decline. Regular watering through the rest of the Fall and then again during the next growing season, especially during hot or dry weather, will reduce the negative effects of drought stress. It’s recommended to water often enough to keep the soil surrounding your conifers and other plants moist, but not wet. Overwatering and saturated soil can cause root decay. Deep weekly watering whenever there hasn't been a significant rainfall during the week is usually sufficient for established plants. Also, maintaining a 2–3 inch layer of mulch over the soil underneath and surrounding your trees and shrubs will help to reduce drought stress by conserving soil moisture, moderating soil temperature and reducing evaporation.

Not all conifers have seasonal needle drop. A few species of deciduous conifer trees actually lose all of their needles in the Fall. Conifers that completely drop their needles include baldcypress (Taxodium distichum), dawn redwood (Metasequoia glyptostroboides) and larch (Larix laricina). Conversely, “broadleaf” evergreens such as boxwoods and Rhododendrons, drop their leaves one at a time and not en masse seasonally.

So if your conifer trees are dropping needles, take a closer look. This may be normal needle drop and nothing to worry about – chalk it up to the fact that we all learn something new every day.