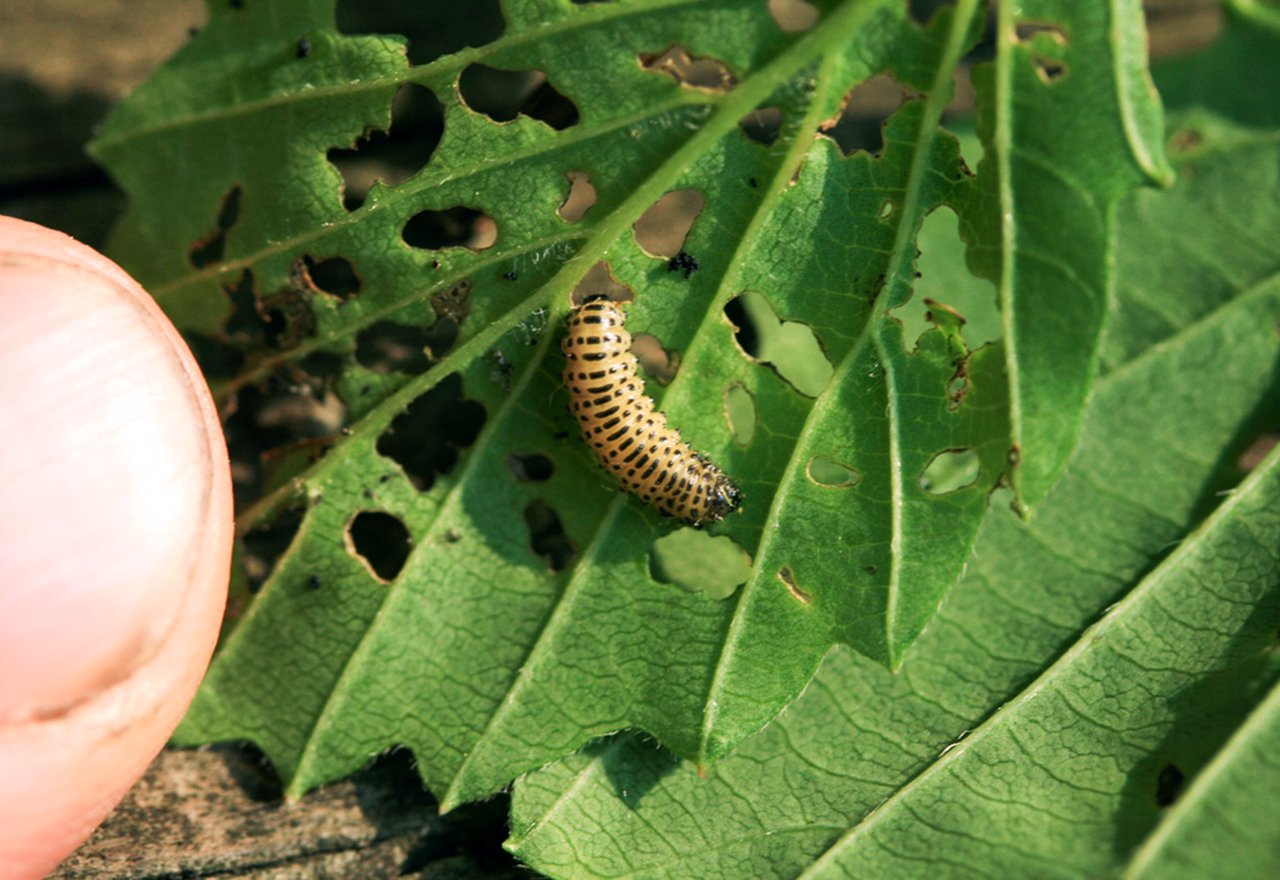 What Are Viburnum Leaf Beetles?

The Viburnum Leaf Beetle (VLB), native to Europe, was first found in North America in 1947, in the Niagara Peninsula of Ontario, Canada. In 1996, it was discovered in New York State in Northern Cayuga County. The Viburnum Leaf Beetle has continued to spread south and west through New York into Pennsylvania, and in 2002, was discovered in Ashtabula County, Ohio where it appeared to have been established for at least two years, based on egg scars from two different growing seasons. The beetles were first reported in the Chicago area in 2013 and became more widespread in 2015.

When first hatched, the larvae are nearly clear and tan but can also be shades of green or yellow. As they grow, they become chubby with black and tan stripes and reach about a third of an inch long. Adult beetles are only about a fourth of an inch long and are tan with a hard beetle exoskeleton and are a slightly wide oval shape. Females are larger than males. Beetles are eaten by ladybird beetles, birds, and other native, beneficial insects.

What Damage Can Viburnum Leaf Beetles Cause?

Two different life cycle stages of the Viburnum Leaf Beetles can damage viburnum plants. In areas where large populations have developed, viburnums can be totally defoliated by larval and adult feeding and egg nesting.

Larvae hatch from late April into May and eat the leaves of viburnum plants. When left unchecked, a large colony can eat all the leaves of one plant, weakening the plant.

Pupae travel down the plant and hide in the soil to grow and do not cause any direct damage to the plant itself. They do need moist soil and there they create a cocoon.

Adults emerge in late June and live through the first frost. Adults also eat leaves of viburnum plants and will travel to new plants to find food. Female adults do a different kind of damage to viburnum through their egg-laying methods. The female drills a small hole into twigs, usually directly under a leaf and usually on new growth. There, she plants about eight eggs and then caps the hole with chewed up twig parts and excrement. These twig excavating, egg-laying, and capping sessions usually happen at night from late June through October. The egg holes are often found in rows and are a different color than the dark holes so easily identified.

How To Get Rid Of Viburnum Leaf Beetles?

Since VLB only destroy some viburnum plants, one way to avoid the damage might be to replace your viburnums with another resistant plant.

Remove infected twigs and leaves, especially those that appear to contain eggs. Branches and twigs that contain eggs are the easiest to spot in the Fall when leaves have dropped. This is a direct and quick method to remove the pest. Do not compost these plant parts – put them directly into the trash bin that you carry to the curb. Burning or chipping the twigs is also recommended.

If you don’t want to remove branches from your viburnum, studies by Cornell show that spraying horticultural oil on egg sites a few weeks prior to emergence (mid-April, before leaves bud is best) will reduce hatching drastically, up to 80%. However, you do have to get the timing right. This will suffocate and kill the eggs.

Additionally, spraying larvae directly with insecticidal soap will disrupt their hormone cycle. Spray this liberally directly on leaves and on larvae. You will probably need more than one application to get all the larvae. Keep a close watch on your plant and start in very late April into May.

Although not as commonly recommended, you may have some success in trying to limit the traveling of larvae down the trunk of the viburnum to the ground. This is helpful if you missed other time frame opportunities. Apply a sticky substance such as vaseline or Tanglefoot Tree Pest Barrier to the bark around your tree (or to a tight tree wrap) to foil their movement between the plant and the soil.

If you’re looking for help with your VLB infestation, consider signing up for our Tree and Shrub Program and get a special Viburnum Leaf Beetle suppression application.

We also sell a Liquid Neem Insecticidal Soap in our store. We offer Neem Oil, which you can use as horticultural oil. Neem Oil is made from Neem seeds, a conifer tree native to India. Neem is known to repel and disrupt the molting hormones of pest insects, while being safe for beneficial insects such as pollinators and earthworms. It is also safe for mammals. In fact, Neem is used in some cosmetics, but is not safe to ingest in large quantities.

Which Viburnum Are Less Susceptible To VLB Damage?

There are a number of varieties that can take some beetle damage and still survive. These species are considered resistant and include the following:

Which Viburnum Are Most Susceptible To VLB Damage?

These species are most susceptible to damage and death due to an infestation of Viburnum Leaf Beetles. Interestingly, more damage is reported when viburnums are planted in the shade.

What Causes Viburnum to Smell during VLB damage?

The excrement of the larvae emit a foul smell that is a good indicator of the beetle beyond visual damage.

How To Identify Viburnum Leaf Beetles In Your Yard